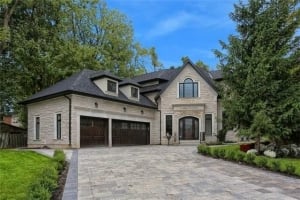 In one of the previous articles we talked about Toronto’s residential architecture of the 19th century with its Georgian and Victorian style houses. Today we will continue this topic and take a looks at housing further development to see how neo-eclectic architecture was formed in the 20th century and what these modern architectural trends are.

The rise of personal automobile era in the post war years brought a rapid development of suburbs. One of the most important suburbs built in early 50’s was Don Mills. The first suburbs houses were mostly small bungalows, and in the following years they considerably increased in size and changed its architectural features. The growth of suburbs has been continuing since then constantly changing the look of the city and creating new places which people call home.
With these developments, historic districts of the inner city underwent significant changes. Thus, some of them have become lower income areas, the Annex residences, for example, were converted into apartments and welcomed new immigrants as well as local students in the 50’s.

The architectural appearance of growing suburbs changed substantially. The simplicity of the original ranch style bungalows was replaced by appealing neo-eclectic style residences.
It turns out that many North American residential builders favoured neo-eclectic architecture and many suburbs that appeared in the past 50 years were built in this particular style. Willowdale district in Toronto has plenty of neo-eclectic style houses.

It may not be so easy to describe a neo-eclectic architecture house as it incorporates several architectural styles – its roof, windows, front entrance, exterior decor can be inspired by completely different historic periods.
Such house usually is an asymmetric structure which combines various materials like stone, brick, composite, vinyl. It has 2-3 stories with multiple high gabled roofs, at least 2 garages, vinyl windows, open floor layouts, and various decorative add-ons such as shutters, dormers, window boxes, wainscoting siding etc. 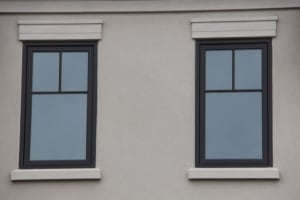 The exterior of such modern mixed house is usually painted in earthy tones such as grey, beige, brown. Often vinyl windows are being painted in darker colours, creating a contrast with the exterior and complementing the overall appearance in a great way.

In general, a neo-eclectic architecture house features an abundance of windows which bring a lot of natural light. There may be different types of windows including bay windows, casement windows, single or double hung windows.  They are often installed with decorative grills. Victorian windows are also very popular in neo-eclectic residences. 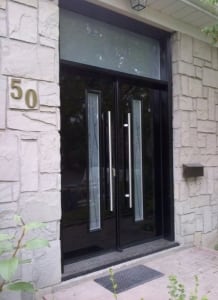 It is typical for a neo-eclectic home to have no or minimal covered porch for the front entry, and have either a traditional or contemporary exterior door.  The most popular materials for a neo-eclectic front door is steel and fiberglass. You may choose to have a solid panel door, or door with decorative glass, or even wrought iron.
Each neo-eclectic house looks absolutely unique for the reason it presents a combination of a few architectural styles and is built from a variety of building materials. At Northview Windows & Doors we have all the expertise to provide you with a high quality entry door and windows which meet industry’s highest standards. We will help you choose the design which works for your particular house, increases curb appeal, brings you comfort and energy efficiency.
Do not hesitate to give us a call 1-866-451-445 and request your free quote today.

Our doors and windows are made to order per your requirements, for that reason we cannot provide quotations over the phone or email. Feel free to drop us a line by completing the form below and we will arrange a FREE and NO OBLIGATION, IN-HOME QUOTE.