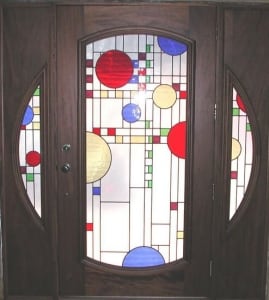 Stained glass windows and doors offer timeless beauty, that is why nowadays so many home owners aspire to decorate their entrances and/or windows with contemporary stained glass inserts – to add more charm and elegance and bring more vivid and bright colours to their homes.

Despite all the wonders of the modern world, we do not cease to admire the flight of imagination and skillfulness of our ancestors. Throughout the history of mankind, humans have created and invented things that have survived time and are still a source of wonderment and inspiration for us. With all the modern technologies in place, it is still not easy to replicate many of these creations made centuries before without any of modern tools and machines. However, there are cases when contemporary works are as stunning if not more, than their ancient counterparts. Modern stained glass creations belong in this group.

The history of stained glass dates back to the Medieval period. The oldest examples of windows made with multiple pieces of colored glass have been discovered in St.Paul’s Monastery in Jarrow, England, which was founded in 685 AD. However, stained glass became more popular around the 12th century, as various techniques of working with colored glass were developed. With the growing number of churches, especially in England, France and Germany, stained glass became an essential element of architecture.

The level of expertise and the multitude of skills the ancient masters of stained glass possessed are truly extraordinary. The early examples of stained glass windows are made of multiple tiny pieces of colored glass that have been cut to fit flawlessly into the pattern, which can be quite sophisticated,  are very strong as they have withstood the elements, wars and earthquakes and have not collapsed under the pressure of its own weight. Some of these masterpieces have survived through centuries and we are lucky to enjoy these spectacular works of art today. 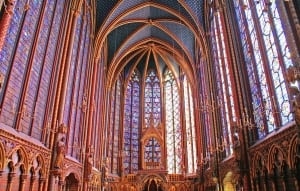 One of the most stunning examples of stained glass of medieval times is Sainte-Chapelle – a royal chapel, built in the 13th century in the heart of Paris, France. Apart from its striking interior, it is distinguished by its amazing stained glass windows that are very large and only delicately framed by the stone walls. The windows depict various scenes from Bible with absolutely astonishing details. The deep red and blue colored glass pieces perfectly fused into complex patterns make the chapel a true masterpiece. The chapel is one of the highest achievements of Gothic architecture, combining the most beautiful elements of it with absolutely gorgeous stained glass work. The rose windows, added to the western side of the chapel at the end of the 15th century is a representation of the perfect fusion of Gothic elements such as wrought iron and stained glass.

When looking at the ancient churches with those unquestionably fabulous stained glass windows, one might think that this is the absolute perfection and unreachable beauty. However, the capabilities and creativity of the human mind are unlimited. Modern stained glass creations are an obvious proof of that.

The largest stained glass window is found in Resurrection Cemetry, located in Justice, Illinois. The 22,000 sq. feet of faceted glass containing 2,448 panels has been recorded in the Guiness Book of World’s records as the largest stained glass in the world. Glass faceting is a modern architectural technique, developed in France at the beginning of the 20th century. However, this technique immigrated to the United States many years later. Conrad Pickel Studio, Inc. started to work on these windows in the early 60s. The windows are constructed of 1 inch thick stained glass panels, which are fixed by epoxy resin. The thickness of glass insures the purity and depth of colors and the epoxy resin makes them strong enough to withstand the elements. Each panel is faceted creating and absolutely astounding effect: over 2000 multicolor faceted glass panels look like huge gem stones of the deepest colors that are equally beautiful under the natural and artificial light. This is truly a masterpiece, worth the fame it has earned. 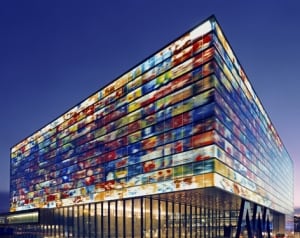 The stained glass windows of the Institute for Sound and Vision in the Netherlands are another fantastic work of art of modern architects. Created by Neutelings Riedijk Architects (NRA), a new generation of Dutch architects, these windows have a distinctive feature: each of the glass panels illustrates an episode from famous Dutch TV shows. These scenes can be seen only from a particular angle, fusing into an absolutely fabulous mixture of beautiful colors. The building is constructed in the form of a cube, the above-ground part of which is made exclusively from stained glass. The Institute for Sound and Vision is a museum and a cultural archive, containing over 70% of the Dutch audio-visual heritage – another reason to visit this extraordinary creation of modern architecture.

Build in 1897 and completely renovated in 2008, the Chicago Cultural Center’s Louis Comfort Tiffany art dome is a breath-taking piece of artwork, containing about 30,000 stained glass pieces fitted into a cast iron frame. The glass pieces are cut in the shape of fish scales and depict the 12 signs of Zodiac at the very top of the dome. After the re-opening of the Preston Bradley Hall, where the dome is located, thousands of people have visited the center to see the dome. During the renovations, the outer concrete layer of the dome has been removed and replaced by a transparent one, which introduced more light into the hall through the glass dome, creating an absolutely fantastic interplay of light and color. 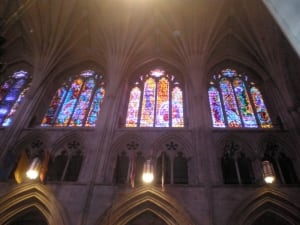 The Washington National Cathedral, located in Washington D.C., has 231 windows, each of which is one of a kind. These windows reflect various architectural styles – from neo-Gothic to modernist, depicting famous events and figures from the history of the United States. Perhaps, the most unique part of this outstanding architectural monument is the Space window, designed by St.Louis artist Rodney Winfield. The window has a 7.18 gm moon rock, incorporated into the pattern of red, orange and white planets and stars against the red and blue background. This tiny piece of lunar rock has been donated to the Cathedral in 1974 by the same men who had brought it – the Apollo 11 astronauts Neil Armstrong, Buzz Aldrin and Michael Collins and since then has attracted thousands of visitors.

We have picked the most impressive works of modern masters of stained glass, but there are many more examples of unique and gorgeous stained glass works found all over the world, that reflect the unlimited creativity of the human mind and this list is only getting longer.

Our doors and windows are made to order per your requirements, for that reason we cannot provide quotations over the phone or email. Feel free to drop us a line by completing the form below and we will arrange a FREE and NO OBLIGATION, IN-HOME QUOTE.